where does this go

Welcome to the
Hillsborough Republican Club
Get More Information 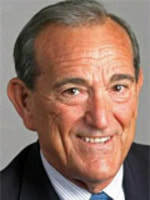 If you are a resident of Hillsborough, or even just an occasional visitor, you will undoubtedly come across the name Pete Biondi.   You may pass through town on the Peter J Biondi Bypass, or visit the Peter J Biondi Municipal Building for various Township Services or to go to the library, or you might participate in the annual Peter J Biondi Run-Walk event to raise funds for charity.

Whatever the reason, his name associated with these places or events, represents a dedication and level of public service to Hillsborough not seen before or since.  With the historical impact this Republican has had on Hillsborough, the town he loved, and where he lived for 35 years, we proudly share this profile of Peter J “Pete” Biondi’s career:

Biondi was born in Newark, NJ, and graduated from Union High School.  He served in the United States Army Reserve from 1961 to 1967.

By all accounts, it was Pete who pushed to have the new Hillsborough Municipal Building, which opened in 1991, house not just township offices, but to also provide facilities for the police and courts, the school district offices, a modern library, and a senior citizens center. While other townships were building numerous, larger, costly complexes for their various departments, Hillsborough built an efficient, workable complex to serve the residents first.

Among his numerous interests and the countless Hillsborough organizations which he supported through the years, were Hillsborough Volunteer Fire Companies 1, 2 and 3, The Rotary Club of Hillsborough, Hillsborough Little League and the Hillsborough Raider Touchdown Association.  Biondi was also a huge supporter of the Somerset County Women’s Center, here in Hillsborough.

In the 1990s, Biondi expanded his sphere of impact as he served on the Somerset County Board of Chosen Freeholders from 1994 to 1997, was its Deputy Director in 1995 and its Director in 1996.

He served on the Industrial Pollution Control Financing Authority in 1997.  He was a member of the Somerset County Planning Board from 1994 to 1996.   Biondi also served on the Somerset County Youth Services Commission from 1996 until his death, and as its Co-Chair in 1997.
In October 2011, Biondi publicly disclosed that he had been diagnosed with non-Hodgkin lymphoma about one year earlier, and that he had undergone chemotherapy and believed the disease was in remission. On election day, November 8, 2011, Biondi was re-elected to what would have been his eighth term in the Assembly. He died two days later at the age of 69 and was succeeded by Republican Donna Simon who filled out his term.

Mayor Biondi’s wife, Joan Biondi, continues to be an avid supporter of Hillsborough Township, and Hillsborough Republicans in particular.